“Anarchist books are a weapon against modern totalitarianism”

The aim of this festival is to bring out the wealth of anarchist, anti-authoritarian and libertarian concepts and diffuse anarchist ideas into society, especially young people across the city. This is particularly important at a time when state propaganda against those who opt for self-organization and grass-roots initiatives as a means to fight prevails, and racism, social cannibalism and turning to fascism are presented as the sole options to overcome the unfolding crisis.

AN ANARCHIST FESTIVAL IN EVERY CITY

Correspondence from the 5th anarchist book festival in Patras

“Anarchist books are a weapon against modern totalitarianism”

On 30-31 of May and 1 of June, the 5th anarchist book festival took place in the center of Patras city (in Esperos, King George’s square). During these three days many people passed from the festival venue, where they came in touch with anarchist/radical books and they attended political and cultural events, in a particularly successful organization, both politically and organizationally, and at the level of address and acceptance. Thus, an area free from state and commodity was formed, a public space which was transformed into a meeting place for discussion, interaction and criticism.

As we have also mentioned in the political call:

“The aim of this festival is to bring out the wealth of anarchist, anti-authoritarian and libertarian concepts and diffuse anarchist ideas into society, especially young people across the city. This is particularly important at a time when state propaganda against those who opt for self-organization and grass-roots initiatives as a means to fight prevails, and racism, social cannibalism and turning to fascism are presented as the sole options to overcome the unfolding crisis. At the same time, even within the resistance movement, political discussion and exchange of ideas to achieve a more in-depth analysis is treated with contempt; we thus believe that promoting self-education, political and theoretical investigation, preserving social and working-class memory against lifestyle anarchism and political hooliganism are of prime importance in the direction of a wider reconstruction of the radical and revolutionary movement”.

In times of radical retreat, where the individualization and the fragmentation of the resistances appear to predominate on the society, we consider it as very important to hold such events, which  are organized  anti-hierarchy and from the base, through which, people of all ages have the opportunity to come close to the wealth of anarchist ideas and believes in a direct, unmediated way, free from the distortions of the dominants.

The first day began with the presentation of the second round of events about “Libertarian ideas in literature” (the first round took place on November of 2018 as a part of events for the 5 years of the self-organized social center “epi ta proso”).The event began with a contribution of a comrade from “Epi ta Proso” with the title : “Tearing down the super-hero myth: the Dark Knight in the services of Sovereignty” and also with the presentation of the comic book “Goodbye, Batman” of Red’n’noir publications, by Tasos Theofilou. After these events, followed the presentation of the book: “Nono’s adventures” of Jean Grave and Modern School, by Stasi Ekpiptondes publications. Both events opened criticism issues to the present  both for the role of the superheroes (as they are made by the dominants) and for the fairytales and the libertarian education.

The second day, took part a very interesting presentation of the book: “When the cock was crying in the dark…”, an anthology of anarchist texts 1971-1978 edited by Michael Protopsaltis, of Vivliopelagos publications as well as a Video viewing about: “The anarchists at the 70s. The struggle of memory against oblivion is a struggle against power.” After the video followed a discussion about the anarchists of this period, their texts and their sayings and we end up in useful conclusion about the present. The day closed with a “rebetiko” live for the financial support of the fair, which took place in “Patreos stairs” and many people participated in this.

The third and final day of the festival began with the presentation of the book: “The last flames of Resistance. A story of a fighter of Volante Rossa”, of Diadosi publications which was followed by a video viewing about: “We did what we had to”, a testimony of Paoli Finardi. The festival finished with a hip-hop live, for the economic support of the festival, with TNT (Rationalistas), Penthimos/Clown, Spira & KK, DJGzas and Hiphopathi. This live was the best closure for such festival, full of sounds, lyrics, slogans and stories from the road and the struggle for the revolution.

At the same time with the book fair, which took part during the three days of the festival, there was a political/radical book exhibition, political poster and photo gallery, texts and magazines of the anarchist/anti-authoritarian movement, as well as t-shirts for the outrelief of the rebuilding of “Libertatia” squat in Thessaloniki, which was burnt by fascists in January of 2018.

As self-organized social center “Epi ta Proso”(1) we would like to thank all those who responded positively to our invitation for participation in the 5th Patras Anarchist Book Festival (publishing collectives, authors, political groups, music groups, comrades who supported with their presence the events and everyone who showed interest about the festival). The great response which the festival had this year, is also due to those comrades who support it since the first year when it took place, as well as to those new people who learned about the festival and they recognized that is really important to support it through the years. Without all these people and the projects that they form, such an organization would not be possible.

In regard to us, we can say that we will keep to promote the unmediated communication, the self-organized  expression, the equitable and horizontal participation and the collectivization, with the belief that the way we fight should be in direct relevance with the world we want to build with the revolution. We will continue our emancipated intervention in a variety of issues that have to do with our lives and with the impact that the plans and decisions of the political and economic dominants have above our lives.

Against the belief of assignment, against every electoral illusion that cultivates the submission and the abdication, we recognize that this festival was just one more moment, one more piece in the fight we give, as anarchists, for a society liberated from the fetters of state and capitalism, for a world of equality, solidarity and freedom.

This struggle will be continued…

1 This was the name of an anarchist newspaper, published from 1896 to the early 20th century in the city of Patras. The group of anarchists running the newspaper had the same name; allegedly, they were the first anarchist-communist group in the country. Epi ta proso can be freely translated as “going forward”. 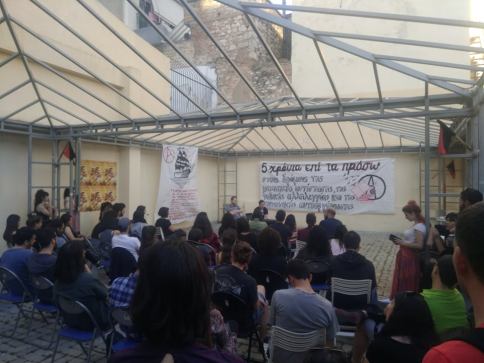 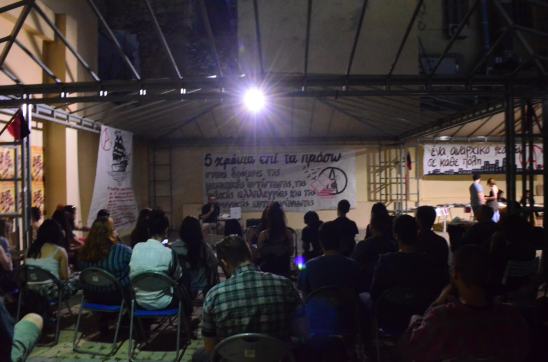 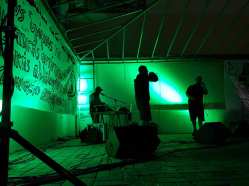 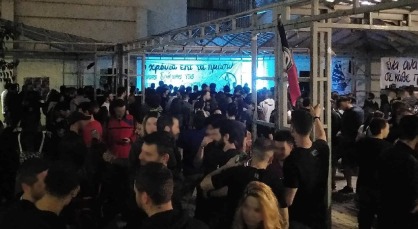 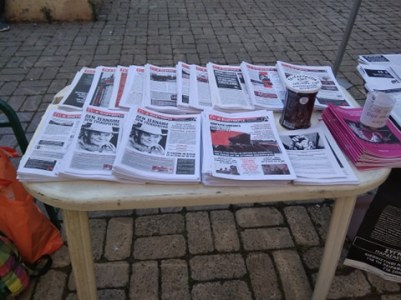 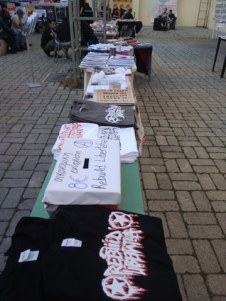 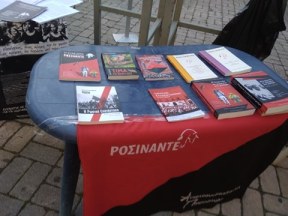 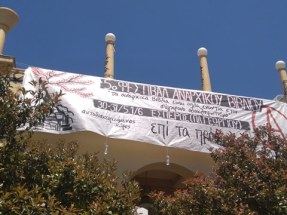 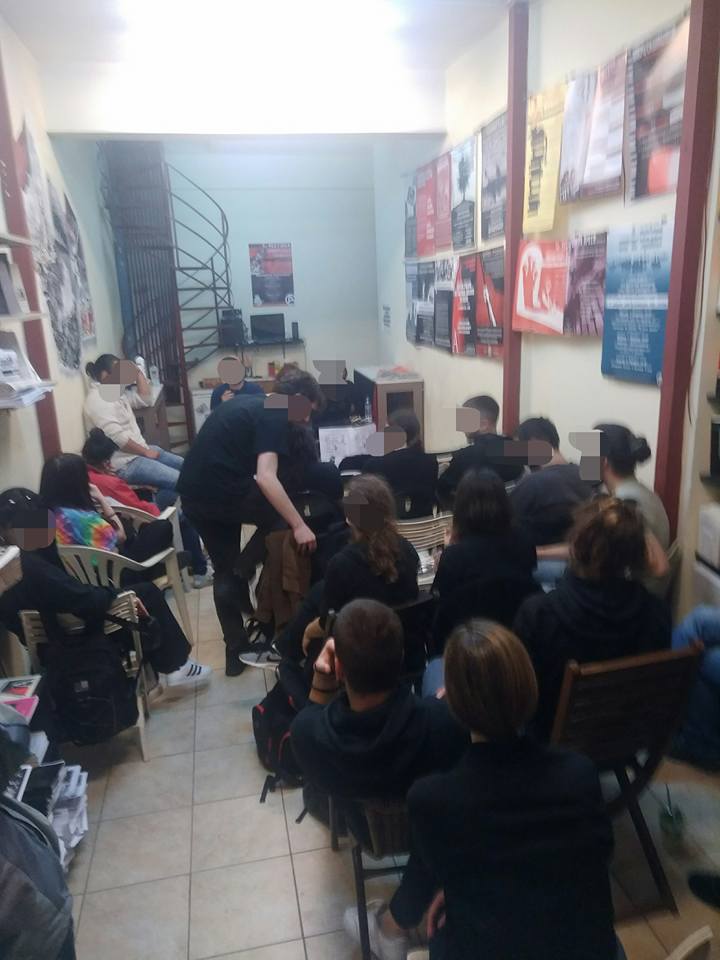